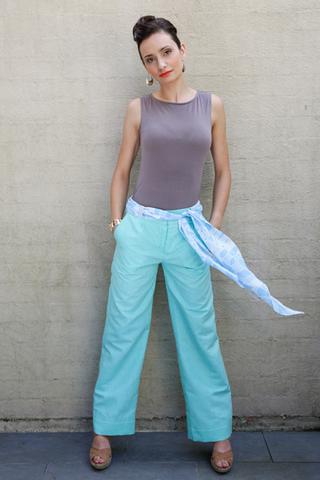 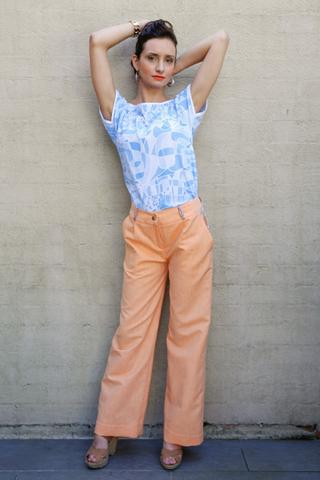 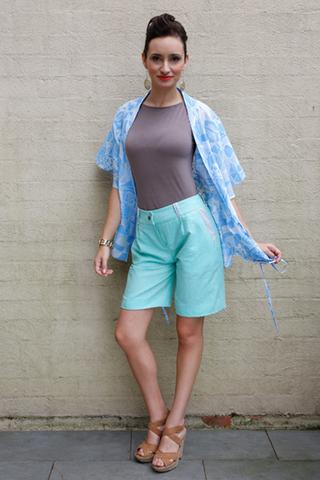 On graduating from Sydney’s Whitehouse Institute of Design, Angela Nash-Blackwell won the highly sought after scholarship to Accademia Italiana, Florence. After a brief stint working with a corporate clothing company, Angela began to form Ampersander in 2005 through weekend markets and making wedding dresses for friends. As an Australian fashion brand, Ampersander gained accreditation with Ethical Clothing Australia, a guarantee that clothes are made under fair working conditions.

Meanwhile, Jonathan Blackwell studied fine art at Duke University and went on to be a practicing artist and designer. Jonathan also lived in Florence, Italy, for a semester at Studio Art Centers International (SACI). Inspired by his business mentors back in Durham, North Carolina, Jonathan sought an MBA degree at the University of New South Wales, Sydney, and continued painting while working as Design Manager with Ensemble Consulting Group. Ampersander’s Trinity Collection, pictured above, features a textile print based on Jonathan’s painting “Trinity Abstract”, creating wearable artwork.

As partners in life and business, Jonathan and Angela apply this creative approach to all of their businesses, which now falll under Nashwell LLC.  Ampersander is now Nashwell Studio, housed on the Nashwell Bespoke website along with Nashwell Bespoke Bakery.  Stay in touch to find out the latest Nashwell developments. Your interest in Nashwell can greatly affect the decision-making process for new products and services.  Active interaction is encouraged.

Ampersander was founded by Angela Nash in 2007 after she returned from Florence on a year-long scholarship with the Whitehouse Institute of Fashion Design.  The label continued through 2015 when the couple, now Jonathan Blackwell and Angela Nash-Blackwell, moved from Australia to Texas.  When Nashwell LLC was incorporated in 2016, Ampersander became Nashwell Studio and Angela Nash Bespoke became Nashwell Bespoke.  Shop Angela’s fashion on NashwellBespoke.com, now home to her Nashwell Bespoke Bakery, adding her work as an international pastry chef to her identity as an Australian fashion designer.